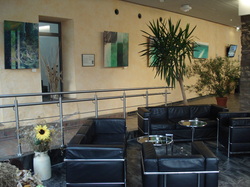 My paintings often reflect aspects of my journey of faith.
I belong to the earth, as much as I belong to the unseen, the heavenly.
For now, I live in the unyielding rift between those two worlds. That is what I contemplate.
The biblical informations increase my awareness of God´s sovereign ways of redemption.
It is often only in the aftermath of inner struggles, that we humans gain clarity.
All the paintings in this exhibition deal with this central theme:

Struggling with self, wrestling with the sovereign Creator

Back in 2004, I suffered a severe, religious burn out. My soul left „church“ almost broke. I had the feeling that God was just too invisible and too silent to bear. Even so, I could never question His existence, let alone His presence in the universe. Therefore, I felt utterly trapped.

Like if I had fallen into a roaring sea that continually sucked me under. Smashing me endlessly against iron cliffs. Pinned down and helpless, I remembered my nothingness; dust and ashes. Fairly similar, I felt some of the „reckless“ might and souvereignity of God-our-Father („swallowing ocean“), as I also sensed His „stern“ will and resolve of character („cliffs“).

My projected ideas about God were faltering. Clearly, He was not going to be manipulated by them, ever. Shockingly I woke up to His dangerous side. I was wrestling in the sea. Likewise, I was groping blindly before His throne seat. And all of this happening in a total silence, a consuming darkness. Like an inexpliquable test requiring you to fail.

At some point I stepped into the void, deciding to return the silence. Too far gone to fear damnation. This act of defiance helped me regain a sense of self. For years I had been crying out in vain for some heavenly response. Then at last, I stopped hoping, and quietness set in.

„Lovely, isn´t it! This intimacy between us now?“ That hit the nail right on. Oh paradox! Though holding my silence, I had in fact been unable to shut Him out. Just too familiar and at ease in His presence. Astonished I noticed too, that the Father apparently wasn´t even offended by my harsh acting-out. He even dropped that sentence in my mind with a slight undertone of guarded respect, imagine!

These testing grounds are here to stay. Anchoring me with divine substances of yearning trust all the more. God is in charge with excellent timing. My surrender comes less frantic now. I´ve come to understand, that divine pressurizing of the soul resembles the process of cutting diamonds.

„Meadow Above The Swirl“ (2010, Canvas: 80x100cm) is a picture of longing. On top of the cliff we  discover some kind of golden meadow. A secure place juxtaposing the forces of the ocean and it´s continual ravings. This image resides between the psychological dimensions of struggle and recovery, or religiously: between frustration and surrender. 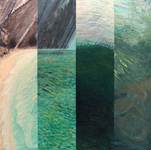 „The Rising“ (2007, Canvas: 100x100cm) is about lostness. About being wrapped in the depths of the sea. About the helpless sense of drowning. The different layers allude on certain phases in the existential struggle. As the title suggests, the painting focuses on the phase were we, to our great surprise, survive the crisis and find ourselves washed ashore. In the cliff there´s the promise of a stairwell. The offer of taking us to a higher viewpoint. 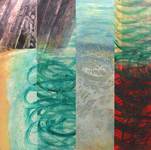 „Cast Away“ (2007, Canvas: 100x100cm) is about the feeling of being cast into the sea, into layers of lostness. About phases in life where you feel utterly senseless, bleeding and drowning. Stages of dying and mourning really. Only to find yourself all wrapped up lying on the beach, washed ashore and coming to your senses. A new phase of growth conquered, as it were.

„Into the Wild“ (2011, Canvas: 70x140cm) is a canvas which rough layers of painting appeal the eye of the beholder into a wide country. However peaceful the scene, underneath some sort of dynamic is pearcing through. Like a flaming soul. Sharp and distinctive, yet soft and tender hearted.
→ Read more 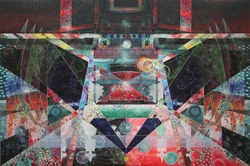 „The Dark Throne“ (2010, Canvas: 100x150cm) focuses exactly on the theme of God´s hiddenness. He created our visible universe in mere beauty and unfathomable dimensions (coming from the invisible realms, as the apostle Paul states). Yet God himself remains the unseen One.
Even so, with my inner eyes I definitely sense some of God´s splendor.
Initially it was my goal to paint God´s throne hall like pitch black and covered with total silence. But at some point the "lights" got slightly
dimmed up and colors began to sparkle in a tangible space.     → Read more