The Closure of Paradise
Introduction


Caused by the insubordination of Adam and Eve in the historic Garden of Eden, the ground of the whole earth comes under a curse: it will no longer give its full produce. Check the bible in the book of Genesis, Chapter 3. Thereupon, God the Creator seals off the land of Eden, placing on its eastern side a guarding cherubim and a flaming sword. Cherubim are winged creatures, apparently a mixture of beastlike and humanoid essence. They are of huge statue and awesome to look at. They act out a supreme authority that directly connects to the majesty and governing throne of God the ultimate Creator. These supernatural beings guard the way to the tree of life. God´s strategy falls into place to prohibit the next catastrophe: that fallen man would now also eat of the fruits of the tree of life and be damed to live eternally on earth under the curse.

Genesis 3 provides us with some very interesting background and incentives about the current disposition of man in the face of the cursedness of the soil. It occurs that through the fall, mankind straightforwardly looses a great deal of his former authority in governing the earth. Fallen man now slides into a wearisome reality of farming and cultivating a soil that works against him.


MY SUSPENSION OF PARADISE SERIES
My works of art venture off to visually explore and contemplate the manifold aspects of this historic event of the suspension of paradise. Specifically, I try to somewhat ascertain the situation at the east entrance of Eden, directly after the expulsion. When Adam and Eve were forced out into the wilderness and the cherubim and a flaming sword deployed themselves in between.

Genesis 3 closes its report this way:
21 The Lord God made garments of skin for Adam and his wife and clothed them.
22 And the Lord God said, “The man has now become like one of us, knowing good and evil. He must not be allowed to reach out his hand and take also from the tree of life and eat, and live forever.”
23 So the Lord God banished him from the Garden of Eden to work the ground from which he had been taken. 24 After he drove the man out, he placed on the east side of the Garden of Eden cherubim and a flaming sword flashing back and forth to guard the way to the tree of life. (The Bible, New International Version)

Just as well, I muse about the fulfillment of the Creator´s prophecy, that one day He will intervene and bring to a termination this curse. Not only the curse over the ground, but also the death curse that came with man´s sin. Taking in the accounts of Genesis, it is most thrilling, to actually visualize those dramatic events that Adam and Eve experienced.


SWAPPING PLACES
And we may as well swap places! As each of us stands in the same line of ancestry. What happened to them, is affecting us everyday. Only difference is, that they first-hand knew how it really felt "before". As they actually lived a life in paradise to the fullest for some (maybe even a very long) time! And then they experienced the "catastrophic transition" after the first sin, the forceful expulsion. And thereafter, these endless chain of moments of total frustration outside the protectiveness of the garden of Eden.

The Brancacci-mural in Florence of Italian early renaissance artist Masaccio has always appealed to me in that respect!


EDEN´S OTHERWORLDLINESS
Of course, I can´t actually imagine how it must have been to actually live in the garden of Eden myself. Clearly the times of "Eden" must have been full of otherworldliness. Not only compared to the cursed state of earthly life, as we know it now. But also in other respects, for instance the co-existence of earthly and super-earthly dimensions. I mean, it is said that Eden must have covered a huge area, like the size of Europe - so this makes you think: How actually, did only two persons managed this vast place?! - even with todays technology, that would be a problem. Because tending the garden was in fact their hands-on assignment before the fall. Some hypothesize, that perhaps in those days, the earthly dimensions were empirically intertwined and actually "bridged" with heavenly, supernatural realms. Traversable and accessable, enabling humans with a range of potentials far beyond what we know nowadays. Like I said: otherworldiness! In that case, the human body, soul and spirit may then have been able to act out govering authority over the earth in ways, we have never known. So in our world, most probably, there may be missing much more, than just a "well-tended Garden", to say the least.


NEW ARTISTIC VANGUARD
Definitely, there´s a lot more to it, than artists have tackled so far concerning the biblical report of the Garden of Eden and the Fall. Dozens of artistic questions remain open: How to depict this whole chain of events nowadays? Purely symbolical? Fragmented-deconstructed like in the "contemporary style" or... ? How artistically visualize this possible historic "intertwinedness" of both earthly and super-earthly dimensions in the times of Eden? And what about the tree of life or even the tree of knowledge of good and evil? Or the cherubim? The flaming Sword? The Being of God...

I guess, it is clear, that up till now, our imagination is rather confined to earthly dimensions... so our best artistic shot at these kinds of subject matter is possibly through (the simplicity of) symbolisms and the fragmentations of visual metaphors (?) But even so, we should never underestimate the intrinsic power of artistic means! Especially not, since it may so be that we have left in our human inner world some strong intuitions of the invisible realm, that help us along the way...

I myself, I surely can´t but admit my total naiveté in these matters - but hey, we have more to win, than to lose, right? As I said it on another occasion: I belong to the earth, as much as I belong to heaven. The bible testifies to that too. And with globalizing science leaping forward, I think we´re just starting to discover whole new spheres...

All in all, endless potential for millions of imaginative artists to venture out. 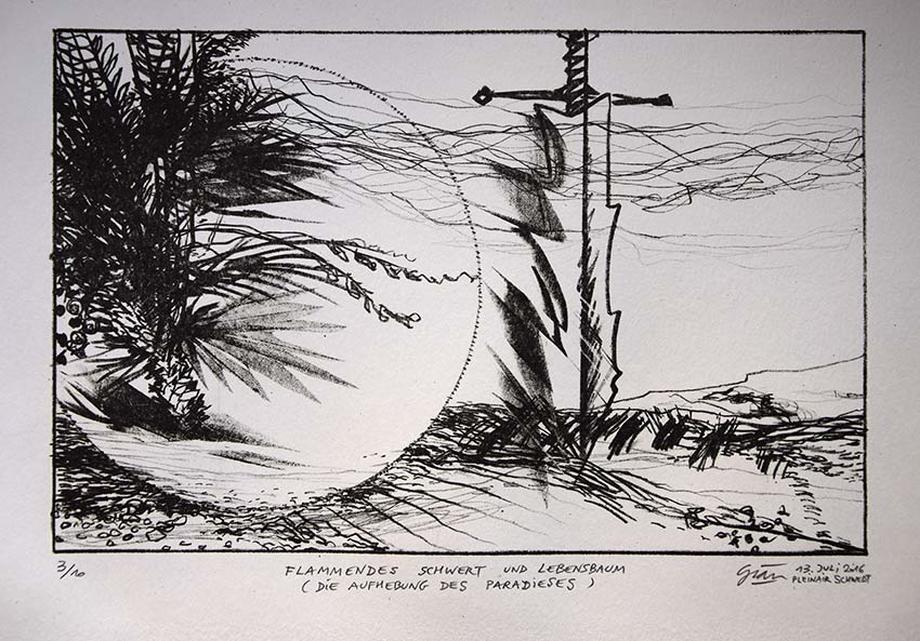 Lithography: „Flaming Sword and Tree of Life“ (July 2016) is a Lithography in black and white.

Lithography: „Sun, Flaming Cherub and Tree of Life“ (July 2016) is a Lithography in black and white. 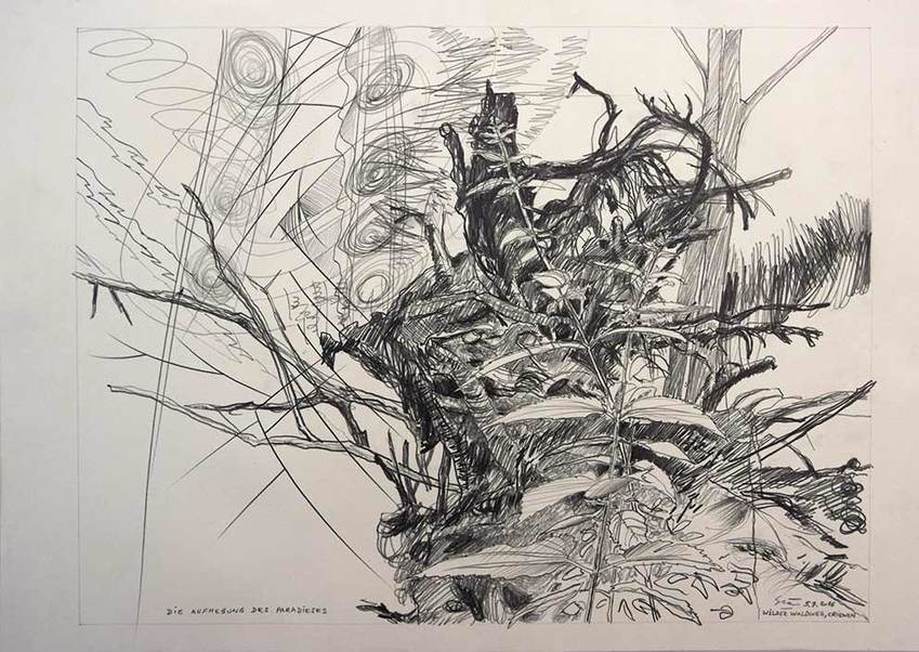 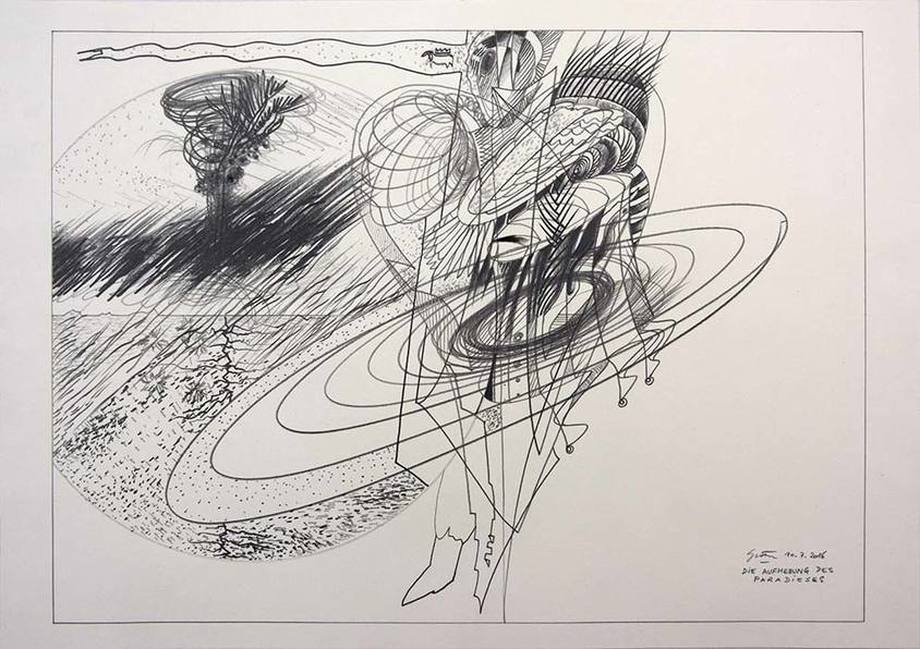 Pencil drawing: „Flaming Cherub"  (2016, 32x43cm)
Studio sketch on the theme "The suspension of Paradise" made in my studio quarters from the
Art Association of Schwedt