About the postcard-sized paintings - takeaway value

Belgian-Swiss artist Gian Michael Merlevede (pronounce: Merr-ləveːdə) was born in 1973. Raised in Flanders, he received training as a graphic designer and illustrator at St. Lucas School of Art Antwerp from 1991 to 1995. After that, he studied Art Sciences at Ghent University (1995–2000) and wrote his master’s thesis on the Austrian Catholic art historian Hans Sedlmayr’s 1948 critique on modern art, Verlust der Mitte (published in English as Art in Crisis in 1955). The thesis compares the viewpoints of Sedlmayr with those of Calvinistic Reformed art philosophers. Then, from 2001 to 2002, Gian studied Christian art philosophy at the Institute for Christian Studies in Toronto.

At age thirty he settled back in Belgium and began a new season as an artist, shedding his perfectionistic approach to painting. He set aside, for the most part, his complex geometrical style and broke loose from his focus on painterly and symbolic narration. Longing for greater relaxation, he began creating a more diversified body of work, not only altering his technique but also letting in more spontaneity and light-heartedness, allowing his paintings to be more open-ended and not necessarily a response to big questions.

This change of direction was Gian’s way of casting off the burden of religious overachievement and his feeling of needing to save Western culture from its descent into moral relativism. As he stepped back from his false sense of responsibility, he slowly but surely gave way to a more joyful and restful take on life. His attitude of playful improvisation is manifest in his “postcard” series, which consists of hundreds of postcard-size acrylic paintings. These paintings demonstrate Gian’s reliance on intuition rather than intellect and his willingness to go where his spirit leads him, even if it’s to someplace unforeseen. As he paints, he feels. When he finishes up, he is often overcome by a deep sense of gratitude. For him, days completely void of wonderment are few. He can’t help but be in awe of the mystery of things, which is forever unfolding.

This same openness to surprise, to mystery, should be present in art viewers too. Gian’s paintings have the potential to reveal themselves in new and unexpected ways in the long-term, to elicit “aha” moments. It could be that after spending much time with a painting up close, a new idea crosses the viewer’s mind and adjusts their whole interpretation of it, jolting them out of a too-narrow reading. Those rare moments when a familiar painting suddenly sheds new light remind us that the human heart has pathways of knowing and of finding out other than just the brain and the bodily senses. Sometimes we wake up to something, not in the least expecting such a thought or impression to surface within us, and it’s not our cerebral knowledge that brought us there.

These kinds of refreshing realizations teach us that somehow, providence is at work. We’re taken aback by a sudden insight, realizing it is not of our own making. It’s all about inspired perception or a thought crossing our minds. True artistry has a way of making these moments of insight possible. They don’t occur at our beck and call, nor do they announce their arrival, but rather they emerge from the depths of the human heart. When this happens, it’s a thrilling experience. It defies our illusions of control. At best, something holy is revealed to us, and our receptivity to the Creator’s secrets increases.

Now in his early forties, Gian is happily married to a woman who is an accomplished visual artist herself. Together they live and work in an old, spacious parsonage from 1734 in rural eastern Germany. He continues creating postcard-size paintings—calling out his playful inner child and riding the waves of his searching soul. He hopes to be ever open to all the butterfly-like secrets of creation, and to see the unseeable One. 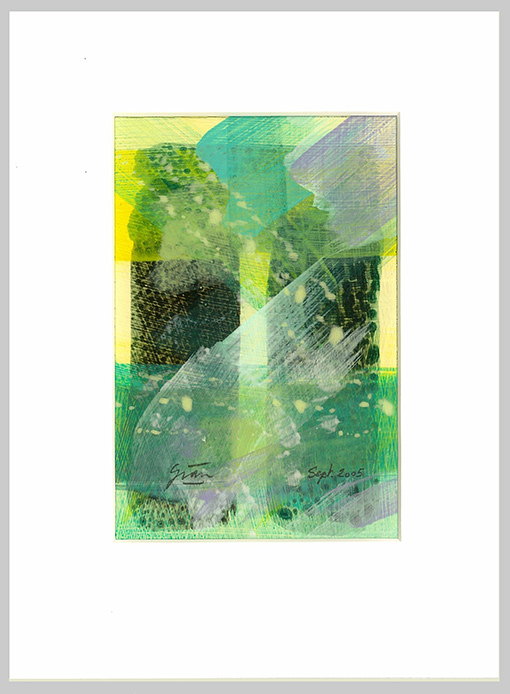